The statistics on income and living conditions, which were published recently, are yet another reminder that Malta should not keep postponing pension reform.

According to the survey, 20.8 per cent of persons in Malta aged over 65 are at risk of poverty and social exclusion, 16.9 per cent are materially deprived and 7.1 per cent are severely deprived.

Malta hovers close to the EU respective averages and, though we do not have the terrible situations of countries such as Bulgaria and Romania, we are quite far from best European performers such as Luxembourg, the Netherlands and Denmark.

I concur with the comments made by my colleague, Mario Vassallo (Times of Malta, January 8) that Malta has a very serious problem with pensions.

Indeed, Vassallo highlighted that people on the national minimum pension are earning between €472 and €552 a month and that even those who previously had high incomes of about €3,000 a month are now earning a relatively low €928 a month.

He correctly pointed out that elderly persons struggling with poverty may end up buying inferior goods and services, resulting in health problems, in what can be seen as a multiplier effect.

In this regard, I have every reason to believe that Malta’s national strategic policy for active ageing is a vital step in the right direction. Hopefully, this policy will help bring about both a better quality of life and empowerment for elderly persons.

However, I believe then when it comes to pension reform, the government is putting short-term electoral considerations before long-term objectives on sustainability and social justice.

Apart from initiatives such as the continuation of the yearly €300 grant to over 75s and some improvements to those in receipt of services pensions, the Labour government seems reluctant to introduce widespread pension reform.

Labour has written off the previous government’s plan for a compulsory second pillar pension scheme and, instead, introduced a third pillar voluntary pension scheme. Practically, this means that people may obtain a tax credit for contributions made to personal retirement schemes in which they may choose to invest.

First of all, they perpetuate economic inequalities because they are more likely to attract and reward high-income earners to invest in personal pensions.

Secondly, many people do not invest in such long-term considerations for various cultural and situational reasons, ranging from a here-and-now cultural orientation to more immediate economic concerns.

Unless the government adopts a ‘paternalist’ approach on pensions, many people may simply opt out from such responsibility. This is why a second-pillar pension can be more socially just and sustainable.

Such a pension would cover the entire population and funds within the scheme can be invested and then used strictly for pension purposes. Labour market participants would top up contributory pensions through extra savings that help guarantee a better pension upon retirement age.

The system should be flexible enough to cater for those who, for some reason or another, move in and out of the labour market. Such reasons may include unemployment, precarious employment that does not make work pay, caring responsibilities, study and individualization of lifestyle, the last case often being characterized by a number of changes (both intended and unintended) along one’s life course.

The system should also ensure that foreign workers are incorporated in the scheme.

The government should make up for those who, for legitimate reasons, cannot afford second pillar pensions.

It should also ensure that the basic non-contributory pensions are adequate to guarantee a dignified quality of life for all elderly people residing in Malta.

Such a reform can be a hallmark of responsible policymaking that binds different age groups together through cross-generational solidarity while also encouraging people to seek employment.

There are other policy priorities which are linked to pension reform. These include the need to keep increasing the country’s workforce. The government’s welfare reforms – including the tapering of benefits and universal access to childcare - intend to make work pay in this regard.

However, I appeal to the government to divest from entering into the neo-liberal route of punitive conditional welfare – which ‘punishes’ those who for some reason or another do not take up the government’s conditions, for example, in the Youth Guarantee Scheme.

I also appeal to the government to make sure that workers are afforded sufficient protection through legislation guarding against precarious employment and also to raise the minimum wage.

The alternative to pension reform may be unsustainable pensions, increased inequality and poverty among pensioners in the years to come. In view of Malta’s changing demographics, which include an ageing population, it is high time that this issue is given the importance it deserves.

Posted by Michael Briguglio at 10:04 am No comments:

If Greece makes an exit 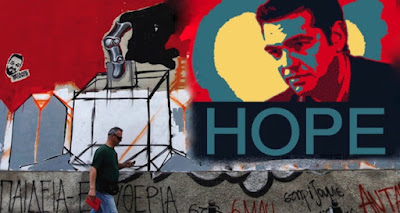 The upcoming snap election in Greece has put Syriza in the spotlight, given that the party is leading the polls. Questions are being raised whether a Syriza victory will result in Greece’s exit from the eurozone.

Syriza (an acronym for Coalition of the Radical Left) was formed a few years ago by various parties, politicians, activists and groups, including democratic socialists, green leftists, Eurocommunists, Trotskyites and some Eurosceptics, among others.

From a party on the margins of Greek politics, it has become the largest political force in Greece. Just a few months ago, it achieved 26.6 per cent of votes in the European parliamentary elections, thus consolidating its position within the European Left. It is now being endorsed even by the Greek Green Party, which has decided to field some candidates in Syriza’s electoral list.

Syriza leader Alexis Tsipras was one of the most charismatic figures in the European Parliamentary campaign. Influenced by 1970s sociologist Nicos Poultanzas amongst others, Tsipras expressed a message of hope and solidarity, calling for another Europe, based on a social model beyond austerity.

Fast forward a few months and Greece is faced with a snap election. Syriza’s projected lead is reportedly narrowing and the electoral result can mean a governing coalition.

Syriza is calling for an end to the austerity programme the EU has imposed on Greece due to the country’s unsustainable economy. Austerity has, however, increased unemployment, social inequality and poverty.

Syriza is calling for a renegotiation of Greece’s debt to enable the country to adopt a more socially-oriented programme while remaining in the eurozone.

It depends on a number of factors.

First of all, the Greek electoral result can mean that Syriza would depend on the support of other parties to put forward its demands. Other parties might have a more moderate perspective than Syriza, especially since the only party to Syriza’s left, the self-proclaimed Marxist-Leninist Communist Party (KKE), has spent the best of the past years denouncing Tsipras and company as traitors of the KKE-dogma.

Should Syriza have to negotiate with other parties towards the centre of the political spectrum, the various internal factions within Syriza would eventually have to come to terms with what is negotiated, which, most likely, will be a less moderate programme than what Syriza campaigned for.

At the same time, the new Greek government would have to negotiate with European powers on its debt. Should both sides of the negotiating table have the ultimate aim of retaining Greece in the eurozone, it is inevitable that compromises would have to be made by either part.

Should a Greek exit from the eurozone be a realistic option, then it would be a different ball game altogether.

Either way, the Tsipras leadership will face tough choices and political risks.

Remaining in the eurozone might be more desirable but this might result in compromises that are deemed unacceptable by the more radical wings of Syriza, leading to yet another political crisis.

Alternatively, Tsipras might show sufficient political skill to negotiate a settlement which strengthens his leadership. This might have political repercussions in other parts of Europe, particularly among other rising progressive forces – such as Podemos in Spain – which are campaigning along the same lines as Syriza.

On the other hand, opting to leave the eurozone might please some radical wings but not go down well with Syriza’s moderate wings and allies, equally resulting in political crisis and, possibly, in another election, where Syriza would likely be the net loser.

However, should eurozone exit really take place, this might result in a more isolated Greece, which will ultimately have to come to terms with its debts by finding other international partners. Who knows what such partners will want in return?

Given that there is no such thing as a free meal in international politics, it would be desirable that Greece remains within the eurozone and that negotiators at different levels display a resolve to reach an acceptable way forward.

In this regard, I couldn’t agree more with the words of the co-president of the Green Group in the European Parliament, Philippe Lamberts. He recently appealed to EU leaders and the European Commission to fully respect the outcome of the Greek elections and work with any democratically-elected government to ensure Greece remains a member of the eurozone.

In the final instance, the Grexit debate reflects what type of Europe one would want: a Europe promoting solidarity, dialogue and sustainability or a Europe of nationalism, imposition and austerity.
Posted by Michael Briguglio at 11:34 am No comments: