The death of fiscal populism

As Malta enters the European Excessive Deficit Procedure, we can wave goodbye to the supermarket policies of Malta's 2 major political parties, representing a banalization of fiscal policy, and which can lead to the slashing down of Malta's welfare state.

Both Labour and Nationalist Parties promised a post-Christmas bonanza in the run up to the general elections, even though alarm bells were already ringing as regards Malta's deficit and public debt.

The most irresponsible proposal was to slash income tax rates for high income earners. When this was announced by the then Nationalist Government in its last budget, the same Government planned an €83 million revenue increase, from €840 million in 2012 to €923 million in 2013, when the same Government proposing an income tax cut for those earning between €19,500 and €60,000, down from 35 per cent to 32 per cent in 2013 and to 25 per cent in 2015.

Labour, which has since then embraced various neo-liberal orthodoxies, took on this policy, even though in opposition it rightly spoke about Malta's fiscal unsustainability. It conveniently refused to acknowledge that countries with strong social models and relatively sustainable welfare systems require progressive fiscal policy. It also conveniently acknowledged that Malta's 35 per cent tax rate for high income earners, was lower than that of many other EU member states. Instead it opted to believe the Thatcherite dictum that lower taxes will lead to economic growth, whilst ignoring the fact that relatively strong social models can complement competitiveness. A cursory look at countries with strong social models in the UNDP Human Development Index and the World Economic Forum competitiveness index confirms this, with, for example, Nordic countries occupying top rankings.

In the past months, Alternattiva Demokratika - The Green Party, progressive NGOs like Zminijietna - Voice of the Left and economists like Alfred Mifsud spoke up on the fiscal perils of such a policy.

Indeed, reducing income tax for high earners was not only socially regressive, but also meant that Malta would be losing out on an important source of revenue, and thus increase its deficit. In turn, this will result in greater pressure on Malta's welfare state, the same welfare state which has helped Malta avoid massive poverty, unlike many other countries which have long gone neo-liberal and which are currently implementing austerity measures.

Economist Gordon Cordina has been quoted on Inews.com as saying that there should be more emphasis on efficient Government spending, 'including social expenditure'. Maybe this will now lead to a chorus of economists, opinionists, party loyalists and others who attempt to legitimize a cutdown in state expenditure on social programmes. Some will welcome this as a move towards neo-liberal economics, which ultimately leads to more inequalities. Others will notice that their silence on fiscal populism during the electoral campaign has come at a cost.

The Labour Government can reverse the fiscal policies it inherited and embraced from the electoral version of the Nationalist Party. Or it can keep moving Malta towards fiscal crisis, austerity measures and the slashing of social welfare.

Ultimately sides must be taken.

-
This blog appeared on Malta Today, 29th May 2013
http://maltatoday.com.mt/en/blogsdetails/blogs/The-death-of-fiscal-populism-20130529

The Labour Government's decision to appoint William Mangion to find rehearsal rooms for music groups is a bad mixture of partisan favours, rash decisions and ignorance on the music scene. It also smacks of a patronizing top-down attitude of 'charity' rather than 'rights'.

During the 2013 electoral campaign, Alternattiva Demokratika - The Green Party put forward various proposals with the aim to help develop Maltese music and culture. These proposals had organic roots. For example, having been in Malta's music scene since my teenage years, and having been in the performing and recording sphere with metal and rock bands since 1992, I, for one felt that this area was one which deserved articulation and support in the political arena. Hence the belief in giving this issue the importance it deserves.

Indeed, AD proposed that the Ministry for Culture should have a division that focuses on the development of musical talent and culture. This division should provide facilities and space for musicians, the creation of a system of soft loans to help them develop and the promotion of Malta as an international music venue.

AD also proposed that the definition of music should not only include traditional music, classical music, jazz, rock music and pop music but also, others like metal. To this one can add a myriad of genres and sub-divisions.

Just as AD's proposal was unveiled, it was warmly received by many people in the various music scenes. Shortly after, Joseph Muscat, in one of his tent-events, announced that Labour would help bands but the way he spoke clearly showed that he did not know what he was speaking about. Basically, for Labour, music development meant finding a garage to rehearse in. Now this has been confirmed, and music has been turned into real estate. While it is true that some bands have problems in finding rehearsal space, this problem is secondary compared with other problems such as double-standards from above as regards live performance facilities, and Malta's geographical insularity which, at times, hinders certain aspects of music development.

Maltese musicians in scenes such as metal and alternative do not need charity, but simply rights, recognition and a level-playing field with other art forms.

And forming part of the singing team of the 'Taghna Lkoll' song does not make one qualified in the field of music development. Just when countries like UK are developing specialized academic degrees in music - such as the degree in Heavy Metal at New College Nottingham , Malta banalizes music development. 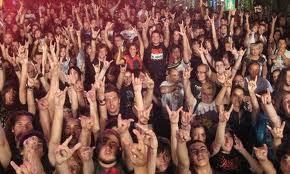