A joint investigation by Reuters and Times of Malta reveals evidence that  Daphne Caruana Galizia murder suspect Yorgen Fenech secretly made a €4.6 million “profit” via his secret company 17 Black off Enemalta’s decision to buy a wind farm in Montenegro.

In reaction, the opposition Partit Nazzjonalista stated that the Police should interrogate those involved in the Enemalta deal, adding that Joseph Muscat (Ex-Prime Minister and current consultant of Prime Minister Robert Abela), Keith Schembri  (ex-Chief of Staff of Joseph Muscat and Panama Papers protagonist) and Konrad Mizzi (ex-Minister and Panama Papers protagonist) had taken personal interest in the project.

In the meantime it is pertinent to note how Montenegro is rated according to three top global democracy indexes:

Freedom House considers Montenegro to be 'partly free' (worse than 'free' but better than 'not free'), and within it 'corruption is a serious issue'.

The Economist Democracy Index rates Montenegro in the 84th place out of 167 countries. It is dubbed a 'hybrid regime' (worse than 'full democracies' and 'flawed democracies' but better than 'authoritarian regimes).

In their seminal work 'Democracy in Small States', scholars Jack Corbett and Wouter Veenendaal state that Montenegro 'has applied to join the EU and has met many of the necessary criteria, but organized crime and freedom of speech remain stumbling blocks to accession.... The political system is dominated by a single party - the Democratic Party of Socialists - the origins of which can be traced back to the old communist party within the federation of Yugoslavia'.

In the meantime, Maltese tax payers and energy consumers keep being robbed on a daily basis due to the privatization and selling of public energy assets by the Joseph Muscat government. Robert Abela's government has retained the same energy policy. 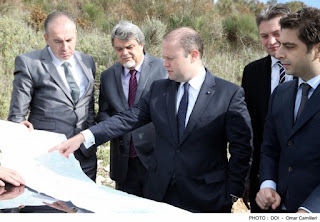 Posted by Michael Briguglio at 5:31 pm